I arrived in Bangalore on Sunday morning at 5am. The airport looked impressive - it was just opened in April this year. On the way to the city, the first shock: shacks, rubbish, people selling food next to the motorway... And the red mud everywhere...

The second shock was my carefully picked up hotel. In my naivety, I had picked up a hotel close to the company I was going to visit. I was going to visit Wipro in Madivala, so all I had to do was to find a hotel in Madivala and check the map. I wanted to walk there every day. I didn't want to depend on any means of transportation. This is how I found The Libra. Don't let the banner fool you: the pictures must be taken in some rich cousin's hotel in the UK. The place is not what we would call a hotel. Minimal furniture, windows overlooking piles of rubbish and construction sites, shower dripping continuously... After a first attempt to eat breakfast, I gave up and did my own shopping. There was a sheet on my matress and then an old blanket without an extra sheet. I asked for an extra sheet but couldn't get one. I spent the first night covered with the towel I had brought with me. It was warm, but not comfortable enough. This is a picture of an executive roam just like mine. Doesn't look too bad here, but it was actually not very welcoming. The rooms were under continuous camera surveillance, and I felt uncomfortable to know someone was watching me day and night.

On Sunday, I took a motorickshaw into town. I enjoyed the experience, although a sudden rain drenched my whole left side. It was less than one euro, but when I tried to ask the driver how to get back - or what was the name of the place where he had picked me up, I couldn't get any answer. I stopped at the Mota Royal Arcade on Brigade Road, and I would have bought the whole place if it wasn't the very first day! I tried to get an Indian SIM card, and I found out I needed a picture and a proof of address in India in order to get one. It was Sunday, so I couldn't get my photo taken. But I had dinner in a fabulous restaurant: Just Oriental. The staff was so nice that I felt spoiled. I remember I had stuffed aubergines and they were fabulous. Nice music, nice ambiance, fantastic food and service! I went to the famous MG road and looked at book shops (almost the same books as home!), tried to buy shoes - well, for women it's basically leather made flip-flops and nothing else!) and entered an old and luxurious saree shop, where I felt a bit like an elephant in a garden: whole families were seated, having tea and discussing the options with shop assistants, who were showing there more and more fabrics. 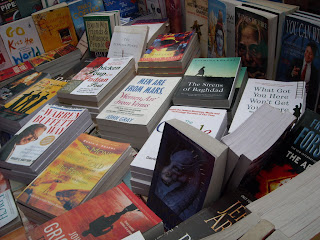 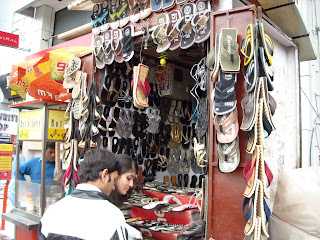 The rickshaw back was 5 times more expensive, but I was glad to see myself back safe. It got dark around 7pm, and I was very tired.

My contact at Wipro sent me a car to pick me up on Monday morning, and I accepted, but told him I intended to walk once I knew were the place was. The driver arrived half an hour earlier, and I asked him to wait, because I didn't want to get there too early. He drove me through a city market and I was amazed seeing people camping there next to their merchandise. The traffic was absolutely insane, and on several occasions I feared for the lives of women and children travelling on motorcycles driven by men. 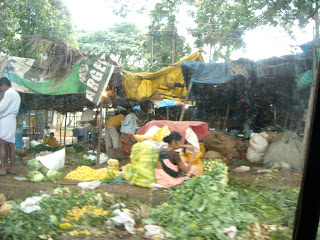 It took me a good while until I got accustomed to the hunking horns - in the beginning, I was continuously terrified. After the first trip, I couldn't imagine walking there anymore, and I accepted Shiva, my driver, as guardian angel! Anyhow, my work took me to different locations, so managing without a car would have been impossible. The car trip took an hour most of the time...

Another shocking thing was the fly-over getting build in the middle of the current 3 lane road, in order to separate the car traffic from buses and motorcycles. I would have never thought of such a solution!

I got a Vodaphone SIM card on the second evening, not without struggle. My hotel proof of address was considered dubious. But taking into account the bombs that went off just two days before that, I understood their concern. There was police everywhere, and at every supermarket they were checking people's bags! Shopping for food was a bit complicated, but I just went for fresh fruit, Ness Cafe and milk. I needed a lot of time to figure out what was in packages and cans.

My deceiving hotel had a LAN, so I used to dive into conversation with friends every evening and forget where I was. I could have moved out, but I didn't have the energy to do it. And I was there for work, and work was good. My only indulgence during these evenings was to eat pomegranates - a fruit I always longed for, as it was one of the main features of Romanian fairy tales.

Crossing the road was a big adventure, especially in the dark. One evening it took me 20 min! Going out for dinner on my own was also tough! After a bad experience in a food court, where I had to queue for each item separately (curry, nan and lhassi), I decided to go for restaurants. One night at Sahib Sindh Sultan, the guy at the entrance tried to persuade me to go for a pub instead. I only wanted a decent dinner in a nice ambiance, and I stood my ground. In the end I got a little table in the middle of corporate party groups, and had a delicious dinner!

I didn't get to see too much during the first week - in the evenings, I wandered around my hotel on Hossur Road and that was it. I was waiting for the moment when I had to get out of Bangalore as my salvation!