Because most of my trips to Dublin were for work purposes, my brain stored a Dublin=work association I'm trying to get rid of. I like Dublin a lot and I'm planning to go there more often from now on. 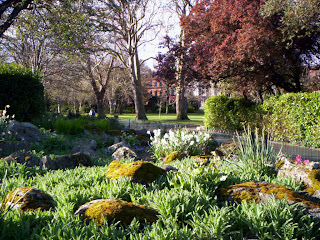 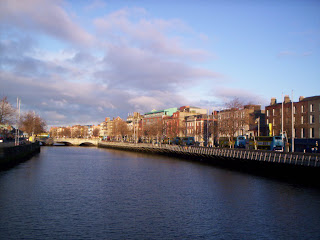 I discovered a different Dublin - empty streets and closed shops - because it was too early! I had breakfast in an Insomnia Cafe (Starbucks wasn't open yet), trying to think of the press release for 3Dcamp. I had my first walk through Stephen's Green on a sunny but fresh morning (all the other times I passed by it!), and I was deeply charmed. 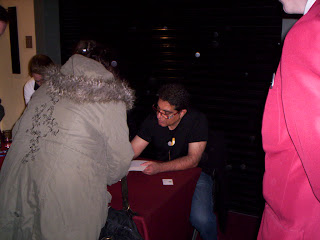 I went to Deepak Chopra's talk at the NCH. I had read a lot of his books and I thought it was a great opportunity to see the man and listen to him speaking. No, for those who asked - I did not reach enlightenment on the spot, but it was a good motivational talk and the boost I needed.

He's a good speaker and unlike other people, pays respect to his audience. I was a bit annoyed by the over california-nized meditation music, but Utsav Lal, the young Indian pianist who played before the talk and during the interval, was fantastic.


I met a friend for lunch, and then I had a look at the iPhone in an O2 store - read a lot about it, but never touched one. Discovered there were 7 degrees in Dublin and 25 in Bucharest! This is not fair!

Impressions after the Social Networks discussion panel at UL

I believe we did reasonably well: according to Bernie Goldbach, we had approximately 50 participants in the Library Board Roomon Friday afternoon.

There were interesting reactions to my invitation sent to the Events mailing list at the university: material for fighting students' Facebook addiction, invitations to similar events, requests to record the discussion so that it could serve as inspiration for other social networking evangelists, and apologies from people who would have loved, but couldn't be present. 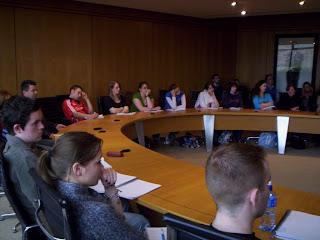 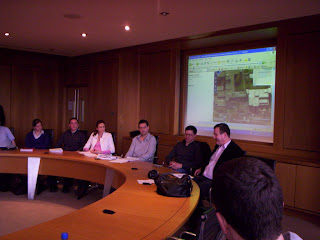 Nothing worked according to the plan: but I guess this was the beauty of it!

Evert Bopp was in the audience and beside making meaningful contributions to the discussion, he qiked(aka recorded and broadcasted) the whole event.
We had a round of introductions where we tried to explain what was the connection between Bernie, James and myself: how I discovered the Limerick OpenCoffee looking for information about the Collison brothers, how Bernie discovered me through the Jaiku channel I was using with my students, and how Bernie and James were connected through the use of TypePad.

We touched on LinkedIn and Facebook. We spoke about how difficult it is to be aware of the implications and persistence of personal information disclosed on the web when you're very young. We spoke about bad experiences with Shelfari and good ones with LibraryThing.

We spoke about how Jaiku and Twitter can be used for getting ad-hoc information from your network. We showed del.icio.us and CiteULike and what can one do with them.

Taken out of context, this jaiku by Bernie created a bit of confusion among non-participants:
"@coniecto does not think any social network service is dangerous, as she explains to the UL socnet seminar".
What I meant was that I do not believe the services in themselves are dangerous. As for any other instrument, there are good uses and bad uses. Instead of banning students from using Bebo in schools and colleges, educators and parents should try to understand what's going on there. I can understand they're freightened because they can't understand it and all they can do is read the newspapers and listening to scary stories - but playing the ostrich won't help!

In my opinion, our teaching has to go where our students are and reach them. I could see this with my first year students: they're allergic to Powerpoint, but you can get their attention if you can prove your point with a video found or uploaded to YouTube ...

Bernie gave a few examples of situations when he used one-liners and podcasts to pass the information to students who wouldn't read the recommended books.

We spoke about "the death of books", and agreed that people who are inclined to read have more channels for getting information about books than ever before.

We didn't get too many questions from the audience - half of them were students. I guess we bombarded them with a lot more information than they could digest in an hour - but let's hope curiosity will do the rest!

We also managed to promote the Internet Experience in Education conference on 22 May 2008 in Thurles, the Limerick OpenCoffee and the 3Dcamp.

After the event, I took James for a walk over the Living Bridge, and we had a look at the venue for the 3Dcamp. We had the vision of 100+ people enjoying the interesting talks, the green ambiance of the campus and the networking... now all we need is to turn the vision into reality:)

PS Thank you, Zemanta, for saving me! I was ready to publish the post without links and go to bed, when I discovered you could actually do 3/4 of my work!

Panel discussion on Social Networking at the University of Limerick

It's been months since myself and Micheal O hAodha have discovered we share an interest in social networking and decided to organise an event on this topic at our university. We started with the idea of a presentation in mind, but as the date kept on slipping , the concept changed, in an attempt to make the event more lively and interactive.

Taking advantage of my collaboration with Bernie Goldbach (@topgold) and James Corbett (@EirePreneur) in bringing to life the next BarCampIreland, I thought of inviting them for a discussion panel.

You are invited to the panel discussion
“Social Networking – Getting Beyond the Hype”
in the Library Board Room, Friday 11 April, 2008, 2-3 pm.
The panel will touch on the variety of existing online social networking opportunities (e.g. Facebook, Linkedin, Bebo, MySpace etc.). But instead of insisting on the potential advantages/disadvantages of social networking as sometimes outlined in the mainstream media, the panelists intend to share insights from their own experience with blogging and micro-blogging as instruments for building social interfaces, networking through "social objects" (like photos, bookmarks, references) and the numerous face-to-face events facilitated by the use of online applications.
Panelists:

And here's a wiki page dedicated to the event.

So, if you're around Limerick this Friday, you are more than welcome to join us!