After staying very late the previous night - doh! the Moon eclipse! - I managed to get back on my feet with 40 min of Reiki, and then headed to the George Boutique Hotel for the TechLudd.

Thanks a million to Anton Mannering for organising the event! Himself and Jessica Roy were wonderful hosts of the event, and I had an excellent time.

I had the chance to see again a few people I had met before (at Open Coffee Limerick, Blogger Coffee, BarCamps and other similar events). I finally met Pat Phelan in person, after late night twitter exchanges and following him on Qik for a while! And I met quite a bunch of new and interesting people!

Joe Drumgoole demo-ed PutPlace(I've installed it a few days ago, but didn't quite get it!), and John Gleeson demo-ed Process Master. Both interesting products, and I think it makes it much easier to talk about your company/service/product when you can actually show something!

I met Sheena Clohessy from Digital Media Forum (one of the sponsors of the event!), found out about WorldTV and discussed the many opportunities existing nowadays for spicing up 3rd level education.

Conn Ó Muíneacháin and Pat Phelan were Qik-ing each other, and I made my first appearance in a qik


James Corbett and myself started plotting the future BarCamp Limerick - we still need a confirmation for the rooms we're trying to book at the university, but the most probable date is May 24.
Rumors say the date for reboot in Copenhagen is not yet set , it will be either the last week in May or the first week in June. 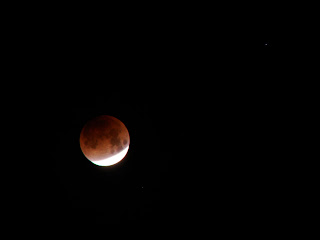 I knew it was coming, I even joined the event on Facebook(confirming I will "attend" the eclipse! lol), but it was pure coincidence that I had so much work to do and stayed up that late!

There was talk on Twitter about watching it, but then I went off line to do some decent writing.
I came back online at 2:42 am to upload my submission, and suddenly both my kids jumped on me on Yahoo Messenger. It was 4:42am in Romania and it looks like they were having a deep philosophical conversation (400 km apart) on the meaning of life and the reason why we're here.

It was only then when I remembered it was time for looking at the skies - here in Limerick it was cloudy - I remember seeing the Moon for the last time around 11pm. My son (somewhere in Transylvania) went outside and came back disappointed - clouded there as well. It was only my daughter in Bucharest who got lucky: the Moon was right in front of her window in her student residence. She said she was happy to be reporting for us from "Eclipse central", and she sent us picture after picture (no qik available yet;)

Anyhow, two papers are in progress for the ICGSE'08, the slides for BlogTalk are almost ready, we made our final submission to ICSE (a workshop paper, but still an achievement!) and the work on other two papers is progressing. Means I can go to TechLudd tonight! Hurray! Hope I'll be able to keep my eyes open...
|| Gabriela 9:46:00 AM
| permalink

Not only that we have an Irish blog week 2008, but now we have a social media social life here in Limerick as well!

On Jan 19, we met for an exquisite Blogger Coffee Limerick at the Marriott, thanks to Alexia Golez;
I blogged about it that very afternoon, but the gods of Internet were against it, and the post disappeared without a trace. (Don't get me started on Mercury retrograde and stuff like that!)

This Thursday, Feb 7, we had the first Limerick OpenCoffee in 2008; as usual, the Absolute Hotel was the venue. Bernie Goldbach and James Corbett took care of the organisation - again, as usual. An interesting mix of people attended, and after a round of introductions and discussions on the format and a possible alternative venue for the future events, I had the chance to talk to a few people (and get a few very useful tips!)
The next one is planned for the first Thursday in March, 11am, in the Absolute. We hear that a website for Irish Open Coffee is cooking, and there's already a blog titled Cork OpenCoffee - but reporting on similar events across the whole island.
There's a Jaiku channel for it, and a calendar of the forthcoming events is available.

And now Anton Mannering is bringing the TechLudd to Limerick on February 21. Venue: the George Hotel. Can't wait, especially because I couldn't go to Dublin on the 24th of January and missed the first event of the series!

Update: wiki created at wikispaces.com for Irish OpenCoffee, with the intent of making dates and topics of future events visible across the island and allowing for input and feedback.
|| Gabriela 1:09:00 AM
| permalink