My fieldwork is coming to a natural end...

The team I have observed for 16 months is handing over their project to another team in Europe. The joys of global distribution of software development:-)

So, my time with them has come to a natural closure. And in a way, I'm glad it happened like this - it was so difficult to make up my mind about when to stop!

The team is staying together and will be assigned another project, and I think this was a very wise decision. It takes about 6 months for a newbie to come to full speed (maybe less if he's only changing projects inside the same business unit!). There's so much to learn, not necessarily about coding, but also about people, tools, internal processes and procedures...

If I give it a thought, only 6 of the members we met in the beginning of our study are still part of the team. Probably 9-10 left, joining other projects, sometimes leaving the company, some other times the country... That's life! People are not spending 20 years of their lives in the same job anymore - they're moving, learning, adapting, and I don't think this is bad. It keeps you alive!

As a former software developer, there were times when I felt I got too close to my "subjects", becoming involved in their activities (at least emotionally;-) . Ethnographers call this "going native"!

But now that the circle is closed, and I'll have to move on and do the writing... the most challenging part!

(Originally published in Tales from the Field of Software Engineering) 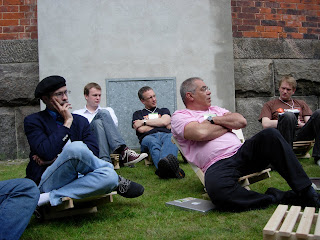 Let's start with an introduction for my readers who have no clue what reboot is:

"reboot is a community event for the practical visionaries who are at the intersection of digital technology and change all around us...
2 days a year. 500 people. A journey into the interconnectedness of creation, participation, values, openness, decentralization, collaboration, complexity, technology, p2p, humanities, connectedness and many more areas.

Applied towards us as individuals, citizens, teachers, culture workers, entrepreneurs, creators and change makers." (from the conference website)

Flickering through my green reboot notebook now, to give you my version of reboot.
First thing I had to do after I found a seat was to reboot my machine, who got stalled:-) That made me think about what rebooting means in people's case... starting fresh!

It was very difficult to decide what session to attend, as so many good things were happening in parallel! I'll list here the talks and workshops I attended, and those I'm terribly sorry I missed, for the record.

My favourites were Jeremy's, Lee's and Leisa's. I guess it was damn difficult for them, but they were absolutely brilliant. I thought of importing this practice in our group - it would help us focus!
DAY 2
Talks I've missed:

I have a couple of bookmarks on my del.icio.us, a set of photos on my Flickr, and a few tweets and jaikus on the #reboot channel.

A lot of people have blogged about reboot - I gave up the idea because I wanted to focus on what was going on. A Romanian writer said once: "you either live, or write", which might seem a bit odd to a blogger. We're living while we're writing - or is it vice versa? writing while we're living? Anyhow, this time there were so many better bloggers around, that I felt like letting go!

For more detailed comments, I recommend Steph Booth, Mathias Muller-Prove, and many others.

First of all, I must say I've been trying to get to reboot for the last 3 years. Two years ago, I was waiting for my Irish visa, eager to start working again after having spent 3 months in Romania. Last year in June, I was deeply immersed in my field studies and I couldn't leave for a single day: "my" team was getting close to their first release!

Before saying anything about the talks and the people at reboot 9, I want to share a few things about the organisation of the event. I wish I'd see more such events happening! I have no clue how Thomas and his pals managed all this, but I was deeply impressed! We're organising a conference ourselves here, and I learned a lot during those two days in Copenhagen!

What impressed me most:
Speaking to someone during the break, I remember expressing my surprise about how "normal" this conference was. Most of the conferences we go to are artificial environments where you struggle to learn the rules and play by them. This time, I felt at home from the very first minute, and there was food for mind, soul and ...stomach altogether:-)

A Swedish friend who hosted me the night before reboot asked me about the conference site and checked it to get an impression. His reaction surprised me: "How do you find all these 'New Age'-y things?!"
How did he come to this conclusion? The topic - "Human?" The social networking site appearance of the web site? I have no clue. But there definitely is a sort of counterculture. Are we the new hippy generation - now tentatively called "digital bohemians"?!

All these unconferences are an opportunity to meet like minded people and talk about things that matter. reboot's system of values (scheduling the talks participants showed most interest in) is not very common. Most of the conferences count on reviewers. Nobody comes to reboot looking for ready made solutions, immediately applicable in their practice. People go there for having their minds rebooted. Listening to out-of-the-box ideas. Bumping into interesting people. Having their own ideas challenged.