Movies and the Klimt obsession

Back home, reflecting upon my trip to Vienna while trying to kill some time on the Dublin airport (thanks eircom! only if your prices weren't that high!).

I think it was my 6th time in Vienna, and I got to know the city much better now. I guess you can't ever get bored there, there are always so many things going on!

What surprised me was the whole obsession ( or marketing campaign?!) around Klimt and Schiele. I was asking myself: was I completely blind the other times I went there, and the talk I had with a friend recently made me more receptive to Klimt's work and personality - or there's something special about Klimt right now?!

I heard about the new Klimt movie, there were posters all over the place - could the launch of the movie be the cause?! 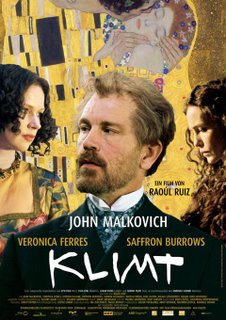 That took me to IMDb, in an attempt to find out the release date - it's already out - but only in Austria for the moment. Doing some more reading around, I found out it was a nice chance to become an extra if you were in Vienna at the right time - and that reminded me of the IDC survey - no, I've never been an extra!

We went to visit the Hundertwasser House and Village - there were reproductions of Klimt's paintings for sale in every imaginable shape - posters, scarfs, T-shirts, calendars, tin boxes.

I thought a lot about the ways the context can influence the "knowing" process. We build on previous experience, on both likes and dislikes... But the capacity to absorb new knowledge is influenced by so many factors! Weather, mood, company...

I'll probably be obsessed with Klimt and Schiele for a while... Anyhow, I have to see the movie!

Why did I miss it in Vienna?! Well, because of my missy who couldn't understand a word because it was doubled in German! And for the same reason, we skipped the Farun Harocki retrospective at the Film Museum.

Questioning my own theory...

I'm in Vienna for a short vacation with my daughter. I was supposed to be online, both for doing some urgent work, and for blogging - after all, I'm on vacation, and I'm supposed to do whatever I love to.

Well, the Internet connection of the friend who's hosting me refuses to work. It worked at my arrival on my own laptop - not anymore! In situations like this, I used to say it wasn't meant to - now I started doubting about my own theory... What's the use of a vacation if you can't do the things you like?! Weather is bad - grey skies and -6 to -8, I'm really looking forward to landing back in Dublin on St.Patrick's Day!

We visited the MUMOK yesterday, and Albertina today - a brilliant Egon Schiele exhibition!
I'd really like to see the Leopold Museum tomorrow, there's a Klimt-Schiele-Kokoschka exhibition, but I have no idea if I can convince my daughter to bear with me!