Any idea what day is today? Burns Day, aka the anniversary of Robert Burns , famous Scottish poet, author of Auld Lang Syne.
And this is what Google brought me:

How would you like to get a pudding that has been cooked in a sheep's stomach? Ugh! You say. Actually it's considered a tasty treat among the Scots. You'll certainly have a chance to try some if you ever get the opportunity to go to a party to celebrate the birthday of Robert Burns, Scotland's national poet. Every January 25, many people in Scotland celebrate this event in a rather befitting way.

Among Burn's many poems is one called "To a Haggis," in which he describes the dish as that "Great chieftain O' the puddin'-race." Naturally, haggis must be served at the party. Haggis tastes slightly like hash. It is made from the heart, liver and lungs of a sheep. These organs are finely chopped and mixed with toasted oatmeal, onions, and seasonings. Then everything is boiled in a bag made from the sheep's stomach.

While the haggis is ready to be served, a man marches into the dining room playing a bagpipe. Behind him comes another man, elegantly carrying the haggis on a tray. The appearance of the famed pudding causes the crowd to cheer... (more here)

A Burns Supper is a celebration of the life and poetry of the poet Robert Burns, author of the version of the Scots song Auld Lang Syne, which is generally sung at Hogmanay and other New Year celebrations around the English-speaking world. The suppers are normally held on or near the poet's birthday, January 25, sometimes known as Burns Night, although they may in principle be held at any time of the year.

Burns suppers are most common in Scotland (and also in Russia, where nationally televised Burns nights are held in the Kremlin) but they occur wherever there are Burns clubs, expatriate Scots, or indeed lovers of Burns' poetry.

Now that's a nice way to celebrate a poet! We're bringing flowers at the statues of our Romanian national poet, Mihai Eminescu, both at his birth and at his death anniversary (he died very young!) and sometimes people are reciting his poems, but having a meal together... and a special dish to serve... and a special toast... that's a completely different thing!

Heard about this yesterday on the radio (RTE Lyric FM, my favourite program), after having a minor incident with my bike on the way back home ( a car bumped into me when sliding back, but no serious harm was done on either side;-)

And I have something to celebrate myself: the day when my Internet connection came back into senses and decided I deserve to be allowed to post on my blog! Cheers!

"A community is like a tissue: it will "create itself", whether you are there or not, but if you do your job you will make it easier (facilitation comes etymologically from the Latin word "facile" that is, in fact, EASY.)"
|| Gabriela 2:07:00 PM
| permalink

This blog post started as a message to my ISP. I was so furious I could have killed someone!
Not only that their new firewall installed at the end of December prevented me from posting both on my blogs, and on any other site, but even sending mail via Gmail and my email client was impossible!

I wrote to them several times. Nobody seemed to care. There was no answer at all. A wall would have been more receptive!

I live in a brand new residence, and the broadband (and wireless!) Internet connection is included in my rent. That means I don't have a contract with the ISP myself, and I'm not even suppose to know what's the name of this company.

I had the same problem from August till October, and because I was the only one complaining, they put the blame on my computer: You must have a virus or something!
And then it was up and down, depending on the firewall experiments they were running!

The ISP company is specialised in providing services to complexes - Internet, telephone, CATV. Looks like their life is very comfortable - there's no costumer to deal with - people complain - they pretend not to hear - and they can get through with it.

They wired the building so well, that 2 months after moving in, when I had a Norvegian visitor, I discovered that in the main bedroom, I had a hole in the wall instead of the Internet plug.
Of course I announced the administrator. And of course it took 4 months to have it fixed.

Sometimes, the wireless stops working on week-ends - do they unplug it when they leave for the week-end?! 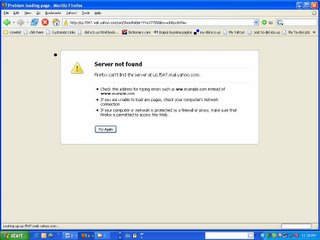 Yes, the Internet connection was kind of working - but read-only!!!
Now let's imagine that the police comes to your place and says they'll have to put you in jail because someone could attack you. Would you stay in jail, or would you prefer to hire a bodyguard?!

I could do very well without a firewall that prevents me of answering to the outside world. I'm a big girl, I know how to protect my computer myself!

Not even the read-only mode is not working properly anymore - my fingers hurt because of the
number of times I have to hit Try again!

Now look what these IMedia guys say on their web site:
"We provide full broadband internet access with complete internet security
through state-of-the art Firewalls that protect complexes from the hazards
of the internet. We manage internet usage per user by evenly distributing
bandwidth throughout the complex. " Phbt!!!

I especially like this blank case study: Maritana Gate Apartments Section 23, with the picture of my apartment block on it. The address is, of course, from another Irish town!

I am fed up, gentlemen!

Update: this text was kept on my Desktop waiting for the day when I'll get my voice back.
Guess what worked in the end? A friend taught me to call the landlord and to refuse to pay my rent until the quality of the Internet connection is back to "normal"! In a few hours, the problem was solved!
|| Gabriela 2:16:00 PM
| permalink

In the New Year, may your right hand always be stretched out in friendship but never in want!

I found this Irish toast, and I liked it a lot...

Today is Women's Christmas (Nollaig na mBan in Irish)- I heard it on the radio and asked a few people what was this tradition. In the end, Wikipedia told me: Irish men are taking on all the household duties on this day and give their spouses a day off! Very nice of them;-)

The same old debate: is Software Engineering real engineering at all?!

Went back and checked Wikipedia again:

A label was applied, probably with the intent of introducing a more structured approach to an emmergent domain (or to sell it better?!)
In any case, rivers of ink have flown ever since - both pro and con...

Update: Browsing through the podcasts from IT Conversations I've been listening to last year, I located Alistair Cockburn's interview on Agile Software Development who also mentioned this issue:

Alistair Cockburn: Well, here’s the thing that was a surprise to me. Well, I did, again, two things. I looked at the history of the term “software engineering,” where it came from, and then I had to look at the term “engineering” itself and what does that mean. And it came around full circle in an odd way that engineering itself is to a very large extent also a cooperative game of invention and communication. So everything I said just now about developing software applies also to pretty much any engineering project, with the possible exception of bridge building, which is so candid in the books that you look stuff up, look up all the answers.

In 1967, the Dean of Engineering at Harvard wrote up a thing where he said, “I think we’ve gone too far. We’ve lost the art aspect, the contact aspect.” Engineering is very sensitive to people having contact with the materials and having a deep, visceral, personal understanding of the behavior of the material they’re working with, whether it’s construction or electricity or whatever it could be, and was advocating a return. But the problem being that in the academic tradition that was building up at the time, the practitioners were getting devalued and the theoreticians were getting more valued.

Now then, I jump to the next thing. In 1968 there was this NATO conference on software engineering. And when you read the preface to that -- you can find it online -- in the preface, it says, “We wanted to come up with a provocative term, and so we chose this term “software engineering” as a provocative term.” That was a big shock to me when I read it because I think, like most people, they assumed that somebody had said… there was reason to believe that software development is a branch of engineering, but, in fact, what these people were saying is, “We don’t like the state that software development is, so we will throw out this word “engineering” and suggest that it should be like engineering and see what goes from there.”

So they had a big impact, but if you read through their description, they didn't understand what engineering was. They were thinking of engineering as being lots of a priori modelling, lots of math, and all of that stuff. So they were buying in to the face that had been put on engineering, not that it was true, but the public face that had been put on engineering. If you’re inside the same conference where they interview each other and you look at what they do, when they say what works, you’ll find, “Put ten people in a room, give them lots of face to face, make sure there’s a filing cabinet, watch who uses the filing cabinets, gossip is good because it helps pass information around.” All the stuff that I write about in “Agile Software Development” put inside this cooperative game is right there under everyone's noses when they are doing individual personal experiences and recommendations. And then you’ll find them throwing in a sentence out of the blue which is like, “Ah! We build software these days like the Wright brothers built airplanes; just build it, throw it of a cliff and see if it survives the crash,” which is wrong because the Wright brothers, they invented the wind tunnel basically, and they made tables of lifts and stuff, so they were doing real engineering.

So the people who are coining the phase “software engineering” didn't understand engineering. It wasn’t a deduced term; it was a provocative term, in their own words. And so we’ve now come in a sense to fully believe the face value, the false face, that these guys falsely put on engineering.

So it comes around full circle when you look at it back again; there’s a lot of similarity between software development and engineering, but not the obvious one. It’s that they’re both examples of cooperative games of invention and communication."